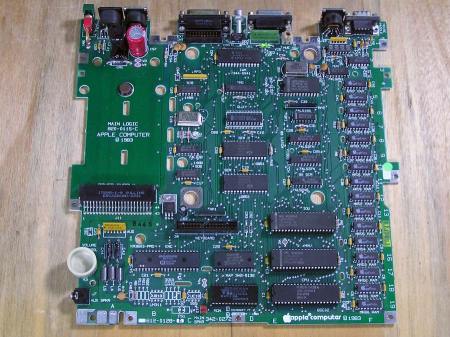 Apple IIc Motherboard. Introduced in 1984, the Motherboard went through several changes during it's life.

There are a total of 4 different ROMs plus a serial port timing fix. Select below:

B ) A serial port timing fix was available for affected IIc's having modem communication issues by installing an oscillator into the motherboard instead of the 74LS161 chip at location C6 on the motherboard. (pictured)

C) ROM 0 - added Unidisk 3.5 support among other things and was a ROM chip swap plus a motherboard modification. *This also added this ability to run a self test so that you know which of the 16 RAM chips went bad.

D) ROM 3 - added a memory expansion socket and a redesigned motherboard. This came with the new keyboard in 1986.

E) ROM 4 - a ROM update to fix the memory expansion bugs in the ROM 3 motherboard.

***Photos are for illustration only and NOT what you will receive***