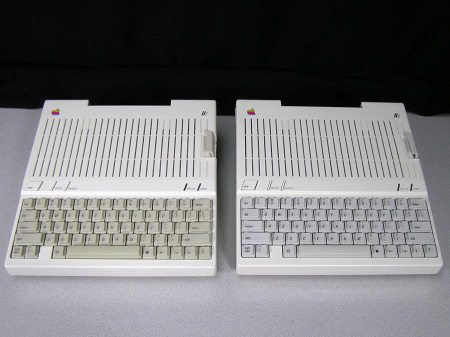 Sold out for now

The Apple IIc, Model A2S4000 is the compact Apple II. The only true portable computer in the Apple II Family and the very first portable model from Apple. Introduced in 1984, this computer was not only portable, but aimed at first time users with it's true plug and play usability. With no user interface slots and the only Apple II with a built in 5 1/4" disk drive, all it needed was an external power adapter and a monitor to be up and running. The equivalent of five slot cards were built in to the Apple IIc motherboard. An Extended 80 Column Card, two Apple Super Serial Cards, a Mouse Card, and a disk drive controller card. This meant the Apple IIc had 128 KB RAM, 80-column text, and Double-Hi-Resolution graphics built-in and available right out of the box. All you had to do is plug in the printer, mouse or other accessory without worrying about an interface card.

The Snow White coloring scheme was only used on this model in addition to the the brand new ImageWriter II and other IIc specific accessories. It came with a beige keyboard, disk drive door and volume control.

In 1986, the Model number changed to A2S4100, and it got a new motherboard (ROM 3) and keyboard. You could continue to get (different) beige color keycaps, door and volume, or the new platinum color like the IIGS was introduced with. The case remained Snow White.

There are a total of 4 different ROMs plus a serial port timing fix.

Select below. All are clean and tested to work and have all their feet. Expect minor scratches and scuffs, anything major will be noted. Coloring is in comparison to similar computers, monitors and other accessories on hand. All come with ProDOS and DOS 3.3 disks.

***While the photos are representative only, all of this batch is in the above pictures***

***All sold WITHOUT power adapters. There are a limited number of good, working external power adapters or "bricks" for these, so they are being sold separately here.