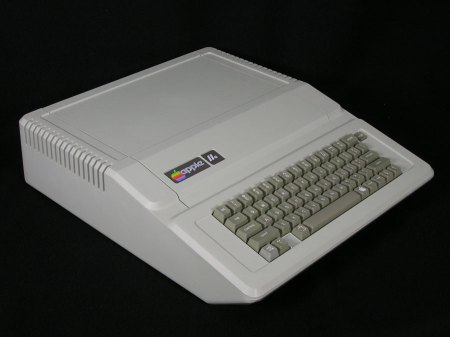 The earliest models had painted cases similar to the II Plus with a lid that used something similar to velcro pads to lock it on to the case. The keycaps sported white letters. A Rev B motherboard was introduced that made it capable of double Hi-Res graphics.

Then they came out with a new plastic beige case and design with a lid that just snapped on to the back of the case. The keycaps changed to black letters. Memory chips started becoming soldered on to the motherboard instead of socketed. An enhanced //e was introduced in 1985 which changed 4 chips on the motherboard including the processor (65C02), 2 ROM chips and the character generator. A kit was available to upgrade existing ][e's. Gradually other chips became soldered on as well. This //e was offered until 1993 alongside the final model, the Platinum IIe with extended keyboard.

There are other differences when shopping for replacement parts as they used up existing parts and had multiple suppliers, but these are the complete computers.

Select below: All are cleaned and tested to work. All //e's will come with an 80 column/64K memory card (bringing it up to 128K). All have feet. Likely missing any number of slot covers in the back. Pics can be provided on request. These are 30 plus years old, expect minor scratches or scuffs here and there. Anything more major will be noted. Expect at least minor discoloration on everything except maybe the early cases and it may or may not be noticeable depending on the coloring of your drive and monitor. Also shipping with some System Disks including DOS 3.3, the latest Apple Utilities and ProDOS.
Note: Any reference to Quark here, which was a popular software package, is simply that a few keycaps were replaced to aid in functionality in the program, nothing else. The P key, for example still says P on the top, but has the word “Print” on the front of the cap.

A - Sold! SN 029993. Early case. Unenhanced, White letters, 1982 Rev B motherboard, socketed memory. This IIe is as nice as it gets! The only flaw seems to be a little marker on the back panel with arrows.

B - SN 276570. Early case. Enhanced, White letters, 1982 Rev B motherboard, socketed memory. No enhanced sticker over light. School computer. Engraved on case to the left of the keyboard, on the base and even the power supply! Has a few scratches on the lid. Offered in this condition as the early cases are so rare. This is the best case of several early //e’s that came from the public school system.

G - Sold! SN D4919DH. Enhanced. Black letters, 1982 Rev B motherboard, socketed memory. Some discoloration visible especially on lid in an arc shape going towards and including right side of the top and where marker was removed..

H - Sold! SN D4C0F52. Enhanced. Black letters, 1982 Rev C motherboard, soldered memory. Even coloring overall. Some discoloration - most visible on right side especially where there was originally a sticker. Minor discoloration visible on top and lid. Also has some scrapes and scuffs towards both edges on top. Property sticker on back of case.

I - SN 515650. Unenhanced, Black letters, 1982 Rev B motherboard, socketed memory. Even coloring. Permanent marker residue on r side of top. Deep scratches in the raised part at back of lid.

Power cable free upon request. Please leave a note on the checkout page.