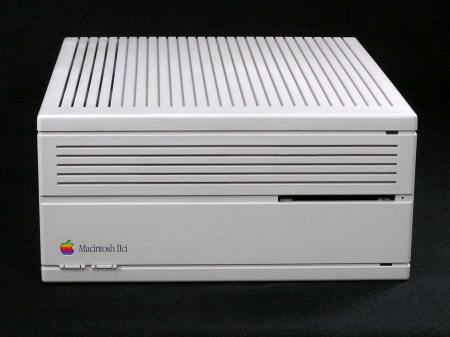 The IIci is the first Mac with a "32-bit clean" ROM, as well as the first Mac II with a level 2 cache, a PDS slot, and built-in monitor support. Like the IIcx, it has 3 NuBus expansion slots and has a port for an external floppy drive in addition to the usual ports.

Select below for the current offerings. All boot and run at this time. Most come with a non tested Networking Card. Most have leaking capacitors that need to be replaced. **Photos are for illustration only **

1) Sold SN F11458GZ724. The case has light overall discoloration, most noticeable on the front where there was a previous sticker. It has 8 MB memory, a IIci Cache card, and an 80 MB hard drive running System 7.5.5. It is loaded with some apps and utilities and has all of it’s feet.

3) Sold SN F12297R2724. The case has light overall discoloration - more medium on the right, and most noticeable on the front where there were previous stickers. It has 12 MB memory, a IIci Cache card, and an 80 MB hard drive running System 7.5.5. It is loaded with some apps and utilities and has all of it’s feet. NO CAPS LEAKING on this day that I can see.

4) Sold SN F12305T8716. The case on this one is very nice. The back has some light discoloration. It has 8 MB memory, a IIci Cache card, a networking card, and a 230 MB hard drive with a new install of System 7.5.3. Has a programmer’s switch, and all of it’s feet. The caps have given out on this one and it no longer boots.

Note that all 68xxx (pre PowerPC) logic boards have been, are, or will be soon experiencing capacitors leaking. Apple Rescue of Denver does not currently offer board level repairs. Exterior cleaning, testing and swapping components, such as floppy drives or hard drives, if needed, is all that is performed prior to being made available. If the case has needed to be opened and the capacitor problem is noticeable at that time, it will be indicated in the description. The computers listed for sale boot and run. Floppy drives have been tested to format, read, write and eject. Unless otherwise indicated, no other repairs have been performed. It is always possible that board levels repairs have been done prior to coming into inventory. WARRANTY on these Macs is limited to it only. It may be too late for working so warranty is limited to being as stated. May or may not boot when you receive it.

These can be great DYI projects or there are people that provide recapping service such as Mac Caps.