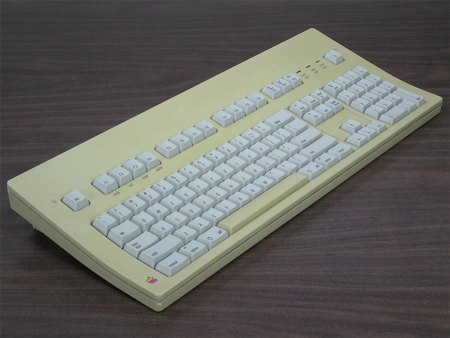 Introduced in 1987, the Apple Extended Keyboard, M0115 is Apple's heaviest keyboard and first extended keyboard to include F keys and PC style navigation keys. Introduced alongside the smaller Apple Keyboard, M0116 it was offered as the other optional keyboard with the Macintosh II and Macintosh SE. Featuring an ADB port on both sides for cable connection to the Mac from one and a mouse in the other. As with it's successor, the Extended Keyboard II, it includes guide posts for templates that came with many software applications. Still one of the most popular keyboards ever with it's clicky Alps key switches!

Keyboard comes with an ADB cable and matching mouse. While all of the keys retain their original color (other than the spacebar), the cases are prone to discoloration. In stock are keyboards with Medium and Severe discoloration. The Medium has engraving on the top left corner.