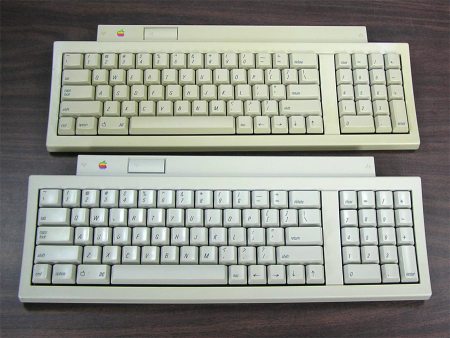 Other identifying indicators of which keyboard you need the part(s) for are:
If you have already carefully removed the cover of the keyboard, the inside of the cover and the controller (encoder) board will be stamped "Mitsumi" or "SMK".

The underside of a key cap of Version B (S), SMK, has legs at opposing corners and a rectangular post. A white, plastic switch may or may not have come up with the keycap. If it did, you will see a spring sticking out the end of the switch. Looking at the switch on the board, will either be a large, white switch sticking up with a rectangular hole and wings on each end or a large hole where this switch goes (if it is still attached to the cap).

All other keyboard parts including switches, screws, case parts, controller, backplate, feet, springs and the wire and clips found under the keycaps are selectable below.

These were complete, working keyboards, the bottom case was broken in version A (M) and a combination of worn keys, a finicky caps lock and the loss of a few wire clips while cleaning made Version B (S) a parts candidate.