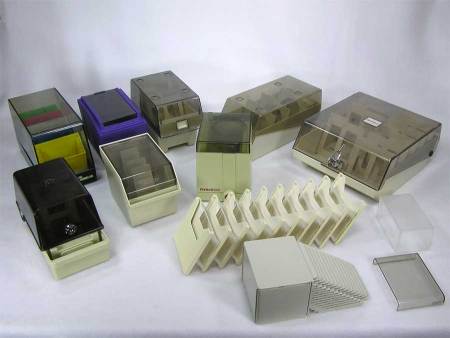 Desktop 3 1/2" disk or 3.5" floppy diskette holders. What a variety. It seems like everyone made floppy disk holders and no two manufacturers had the same dimensions or even held the same number of disks! Many are one of a kind (in my inventory anyway), some have clear lids, some have smoked lids. Some have locks and some even have keys. Some have outside the box disk storage for a few disks, and some have no provisions for dividers. Some are stackable and some aren't.

The smaller unique ones are gone for now, but more may surface in the future.

The number of disks storable in each often depends on how many adjustable dividers are in use (most come with 3). I am not going to take the time to list these separately, so it's a grab bag of which style you may receive. Dividers may or may not have small labels on them which may or may not be written on. If you order more than one, I'll try to select matching styles whenever possible. Smaller, or more travel size are available here.